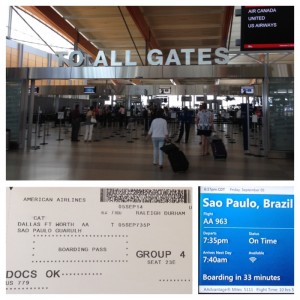 Every time I go to the airport I have a feeling of excitement. I have an idea that those planes sitting on the tarmac could take me anywhere in the world and that the adventure is out there, just waiting to be had. But then inevitably, no matter how wonderful my trip is, it ends too soon (and somewhere along the way I get stuck in PHL, probably just to quell some of my excitement), and it’s back to reality. This time feels different though. I don’t walk past gates saying “Chicago/O’Hare” or “London/Heathrow” with envy. This time the adventure is mine to define and pursue!

With the help of my friend Katherine, who drove me to the airport Friday morning, my travels got off to a great start, and the rest of the journey was almost too smooth for me to believe. I was switched to an aisle seat on both legs (I felt like I had somehow tricked the Brazilian couple when they asked if I would switch to the aisle seat so they could sit together in the middle for the 10 hour flight), everything was on time, my friend was waiting for me at Guarulhos, and the “city of drizzle” even came through with a beautiful day of sunshine. My greatest personal achievement however, came early on when the flight attendant came around with food. He first addressed the Brazilian man next to me asking, “pasta or chicken?” When he posed the question to me though, he offered, “massa ou frango?” Apparently my earlier request for uma agua was so convincing that he took me for a native. Needless to say, I was thrilled. I should probably just take the win and go home now.

The rest of my first day has been pretty surreal. There was no “Bem vindo ao Brasil” sign
at the airport or anything like that, and speeding along the highway in a cab felt much the same as coming from any other major airport. There is the tiny matter of everyone speaking in another language, but I’ve been spoiled today by having a Brazilian escort—on Monday, I’m on my own. And although I’m certainly nervous about the language, speaking

in Portuguese with the man next to me on the plane for hours assuaged some of my fears, not only about being able to communicate but also about being able to show some personality in another language. Although in the interest of full disclosure, when he tried to say “bom dia” at 5am, it was as if I had never heard a word of Portuguese in my life. He probably thought I had multiple personalities.

My bigger challenge, as anyone who knows me will likely agree, will be finding my way around. Walking a little today gave me the sense that the city is pretty disjointed and unplanned. Actually, it’s less of a personal opinion and more of a well-known fact that some Brazilian cities, notably Belo Horizonte and the capital, Brasilia, were carefully planned, whereas Sao Paulo is an sprawling metropolis that grew somewhat haphazardly throughout 20th century. It’s therefore not too surprising that navigating the city is difficult for Brazilians as well. Some advice I’ve heard is to ask ten people for directions and then to factor the average answer into your ultimate decision. Clearly it’s time to revert back to the old-fashioned method of actually using a map, but I’m pretty terrified of ending up here.

Fear aside, I am very excited to be here and to start this new chapter. Most importantly, my friend showed me today how to get to a huge, famous bakery, pretty close to where I’m staying. I think I’ll be ok.