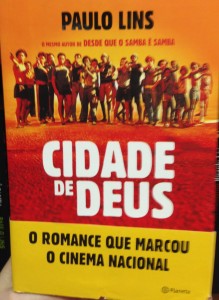 The quest for power and fame is certainly not confined to the favelas. In fact, these seem to be shared goals across cultures and classes, but the values and achievements that lead to the acquisition of these goals differs enormously depending on the circumstances. And even though the Cidade de Deus protagonist “Dadinho,” or “Zé Pequeno” as he came to be known, appears to be the embodiment of evil—as a young boy, he isn’t impressed by the lack of bloodshed in some older boys’ holdup at a brothel and takes matters into his own able hands—it seems like, Zé Pequeno aside perhaps, these “evil” actions have a lot less to do with inherent evil than the privilege of birth or lack thereof. It’s as if most of the people in the favelas don’t even know that they are supposed to “want to get out.”

I’m still trying to figure out what to make of this movie that left me pretty dumbstruck. I just know that it left its mark, and especially given recent, although entirely different, events in Ferguson, MO, I feel guilty for not acknowledging the many privileges I was born with. Brazil is often referred to as a country of contrasts. This was best represented in the movie by the extreme violence and poverty that are overlooked by a corrupt police force, set in parallel with the serene, beautiful beaches of Rio. The country is known for its inequality and classism, and Cidade de Deus provides no solutions.