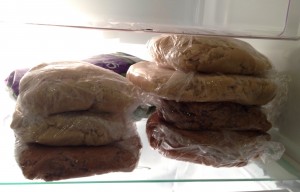 No, there was something far more fundamental to a good cookie party that was posing a 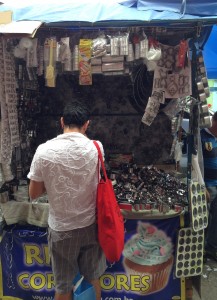 problem here. Somehow in my meticulous planning, I had never even thought to pack cookie cutters, and they proved to be harder to find than I might have supposed. The consensus among my friends and salespeople alike was that 25 de março is the only place to go for cookie cutters. Enlisting the aid of Maisa, we walked down the packed streets of shoppers, popping in and out of the many kitchen stores to no avail. Finally, after being directed to a specific shop, I instead ran into the “Rei dos cortadores” himself, the cookie cutter stand I had been half-heartedly hoping to find. Some papel manteiga (essentially parchment paper) and paper cups later and we were in business!

Probably thinking he was taking part of a time-honored tradition, one of my attendees asked if all Americans make cookies together on this particular date in December. I had to allow that, while other Americans certainly make Christmas cookies, most don’t guilt their friends into doing it with them yearly. Perhaps then, when Bruna decided to set up a competition between Tammy and me, to see who could answer the most questions about Brazil, it was a just reward for my bullying. My questions were, of course, significantly easier than Tammy’s so I’m doubly embarrassed to admit to Stela that I received a red granular icing “pie” (I see what the cookie blogger was saying about the união brand of powdered sugar’s texture) in the face for not knowing the number of states in Brazil. Tammy and I both decided we’d had enough of that game not long after.

Although it was stressful, in some ways having the cookie party on my last night in town was ideal. Running around offering people “sugar or gingerbread” was a good distraction from the fact that I was leaving Brazil the next day without a return ticket. It also took away any immediate opportunity for reflection that these people who I had met less than three months earlier were including me in their group, reminiscing with me, and now adding their own special touches to one of my personal traditions.  Still, when I sat down for a moment between trips to the oven, I felt grateful to have somehow stumbled onto it all.