I’ll admit I still haven’t figured out how to navigate the restaurant scene here. Although I imagine the US is also very bewildering for foreigners, I maintain that, if only because 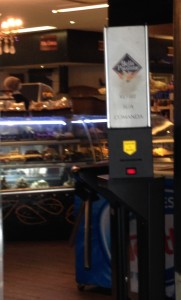 of the extreme variability in the ways your tab can be tallied, eating out in Sampa is significantly more complicated. My first experience eating out was at Bella Paulista, the fancy bakery near Av. Paulista, just a few hours after I’d groggily stumbled off the plane. Upon entering the bakery, I was confronted with a turnstile and a man in a suit. As if entering a parking garage, my friend pushed a button on a machine next to the turnstyle, and a small plastic card popped out. Seeing that I was at a loss, he pushed it again, and handed me my own plastic card, indicating that I should go through the turnstyle. As I struggled with the turnstyle, the man in the suit handed out plastic cards to the people behind us.

When we entered the bakery, the chaos reminded me of Durham’s hip and super-stressful restaurant/shop/bakeries, “Foster’s” and “Parker and Otis.” However, unlike these places where everything is ordered at various counters around the shop, at Bella, we were seated

and brought a menu. When we placed our order of coxinha, pao de queijo and fresh squeezed orange and mango juice (in honor of Paula, of course!), the waitress walked off with our plastic “comandas” (this might be a niche market for aspiring artists who want to expatriate), returning them several minutes later when our food came. It wasn’t until the next morning when I went out to breakfast at a padoca, or bakery/bar, with Tammy that I understood the function of a plastic comanda. This time the card was not required for entry, but we were each handed one when we sat down at the “bar.” When we ordered our grilled pâo de queijo, sprinkled with queijo parmesâo and filled with queijo requejâo (yes, that’s three types of cheese), the man behind the counter grabbed our cards. A few minutes later, when I ordered water, it was only after significant prompting and gesturing from Tammy, that I realized I needed to hand in the plastic comanda again. At the end of our breakfast, we hopped down from the bar and brought our comandas to the register where we were rung up.

I think if that’s how all bars, café-type restaurants and padocas here worked, I might just about be able to get the hang of it. However, enough cafés here employ more familiar payment methods, that on the slightly rarer occasions I do need to use a plastic comanda, I am constantly forgetting to give it to the waitress, leaving it at the counter, or not taking it back from the cashier. This last can be particularly fun if there’s a turnstyle, since you also can’t leave the establishment without dropping your “paid” comanda in the slot. And after ordering food at the counter, I’m usually so relieved to have successfully communicated my request, that when the waitress looks at me expectantly, I still have no idea that she’s waiting for me to hand her the comanda.

Luckily, sit-down restaurants don’t seem to use plastic comandas. However, there are, of course, many different types of sit-down restaurants. Since the past week has been Restaurant Week in Sao Paulo, I had big plans to explore all types of restaurants and provide a careful critique of Sao Paulo cuisine. In reality, I have only gone to one restaurant week venue. Here, restaurant week functions much like anywhere else. For a fixed price of R$38.90 or R$50.90 for lunch and dinner respectively, you choose from a 3-course menu. Since I’d heard that Brazilian food isn’t very spicy, I was curious to try Brazilian-style Mediterranean food. Olivia, another American who I’d met through an expat social network, was also on board for the investigation.

I chose Arabia for us, since it got good reviews, looked interesting, and is close to the metro. When I made reservations on BestTables, the site said something to the effect of, “we’ll kill your firstborn if you are late or miss your reservation (although maybe my Portuguese isn’t all that great after all).” Of course when we arrived promptly at noon, the restaurant was hosting some sort of business meeting. The presenter came over several times to apologize personally to each of the small groups of people waiting in the front, but that didn’t seem to prevent the meeting from dragging on another thirty minutes. Luckily Olivia and I had left significant buffer time before work, but what frustrated me more was that one by one, every other group of people was being led somewhere else in the restaurant, when we had arrived first. Finally, I went up to the host and asked if we could be seated like everyone else. He hesitated for a moment and then led us to a table. It seems the presentation was ending then anyway, so I will never know if we weren’t seated because we were speaking English and therefore clearly foreign or if we just weren’t assertive enough.

Either way, as predicted, the food was good but not particularly spicy. For our entrees, Olivia ordered a tasty looking couscous-based dish, while I somehow managed to request the equivalent of a subtly-spiced hamburger on a pita with hummus. This was probably my gentle reminder to not let all the nice people here who compliment my Portuguese get to my head. At least for dessert I ordered intelligently when I ordered a delicious, sugary, traditional Middle-Eastern pastry. Before bringing our desserts, the waiter left a large pitcher of a yellow-ish liquid on our table. We were both eyeing it, wondering if it were some sort of tea we could drink, when the waiter doused my pastry in it and removed the pitcher. At that point we were both pretty relieved we hadn’t tried to fill our glasses with sugar-syrup! 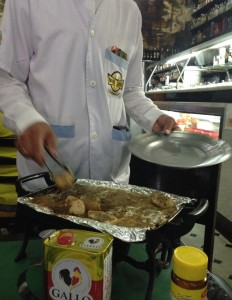 Overall, my initial restaurant experiences here have been quite good. Other highlights witha Brazilian flair have included gnocchi de mandioquinha, or gnocchi made with mini-cassova root instead of potato, and pizza with, what else, but catupiry and three other types of cheese. Over the past weekend, Tammy and her friend brought me to a Boteco in Moema for more of a “tapas”-like experience. Here, there was no plastic comanda, but waiters bring drinks around and note how many you drink on a paper comanda they leave on your table. In addition to beer, we also partook in more Brazilian favorites such as fried semolina (similar in looks but far superior to French fries) and fish they cook and season on a grill right in front of you. Perhaps the most critical part of my boteco experience, however, was being reminded that I have a very important decision in my near future—or as soon as possible, actually. On the wall of the boteco there were plaques for every Brazilian football club. I’ve been here almost three weeks; it’s time to pick a team. I hear that Palmeiros, a Sao Paulo team, is really struggling this season. Given my Northwestern fandom credentials, I feel that this is clearly the appropriate choice.