I realize my last post was really more of an unfinished thought, but I wanted to get some ideas down as a bookmark to return to later. For me, Cidade de Deus was a movie I needed to write about even though my ideas aren’t yet fully formed. I couldn’t move on to the next post without jotting down some thoughts. It feels like it ties in with all too relevant (to the US) themes of subtle racism and invisible privilege, but maybe that’s just because that’s been my recent academic focus and is on my mind. I would love to hear anyone else’s thoughts sometime! 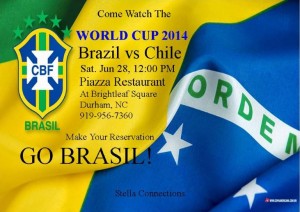 For today though, I wanted to write about something much lighter. I want to talk about some really wonderful new friends I’ve made thanks to my tutor. Stela may be my Portuguese tutor, but where she really shines is in hostessing and connecting people. When she invited me out to Piazza Italia to watch Brazil’s first World Cup knockout round game with a few of her friends, I was nervous to go alone. Usually, as long as I’m actually invited, I am not too shy to walk into a group of people I don’t know, but this felt a little different. Even though Stela invited me, I really felt like I would be crashing a party. The people there, many of whom were family or had known each other for many years, would all be Brazilians bursting with national pride. I was just an American, with no real connection other than a tutor who had invited me to learn a little more Portuguese in real time.

When I arrived for the match, however, the scene was a little different than I expected. The whole restaurant was filled with yellow and green shirts and toy vuvuzelas. There were families with young children climbing from one adoring set of arms to another and young professionals dressed up in sparkly “Brazil” tank tops and miniskirts (well, maybe just the women). The minute I walked in, Stela screamed as if this was the most exciting moment of her life and gave me a huge hug, escorting me to her own table at the very center of the action. During the game, there were of course still circumstances that made me feel like an outsider—should I refer to the team, saying “we” or “you?” Am I allowed to speak critically about the Brazil side, or is that akin to criticizing someone else’s mother when only they are allowed that offence? But none of these concerns were at all brought on by my tablemates, who, between lively rounds of yelling at Neymar to chuta or vai, would ask me about myself or talk about their home state in Brazil and lie to Stela that we were only speaking Portuguese, whenever she returned from her last flutter around the room.

About an hour into the game, Stela came back to our table and shrieked upon learning from her son that Chile had scored (30 minutes earlier) to tie up the game. During penalty kicks, while biting her blue and green nails, she leaned over to me looking worried, “I want to keep partying!” Luckily for Stela, Brazil and maybe the World Cup in general, the hosts were not knocked out that day, and our crowd leapt to their feet as soon as Jara’s ball pinged off the post. Victory songs were sung, hugs were made all around, and Stela escorted me over to a group of the young professionals.

After a brief introduction, a young woman named Ana (I found out later she and Stela had never met before) elected to be my host and brought me around to meet her husband, Cesar, and the other friendly Brazilians in their group. Her friend Josie tried to teach me how to Samba, which felt to me like moving your hips faster than humanly possible, but she, of course, made it look easy. Everyone was in a frenzy celebrating the victory, dancing, singing and taking pictures. In the midst of the madness, Ana and Josie and co. told me about their own journeys as expats. What impressed me is that they came over (up?) mostly just because they wanted to learn English and do something different in their lives, and they’d made it work. It gave me a little bit of confidence to think, why couldn’t I do something like that too?

As we left the restaurant, the young professionals crowd tried to push me into going out to Raleigh with them. I’m sure part of it was because I was the newcomer and the foreigner in the group (even while still in my own country), but I really appreciated how kind they were and how instantly they accepted me and wanted to include me in their fun.

Ana and I have hung out since, and apparently I am her first American friend in her four years in the US. She says that, even acknowledging that as an expat it is easier and less scary for her to hang out with people from her own country, in her experience, Americans are not always the most willing to get to know foreigners. And I have noticed too that Americans, especially in a group setting, are not always that inclusive of new people in general. I don’t have a great sense for whether this is specific to Americans; I had a very hard time making friends in Spain, but I also had no confidence in my language abilities, so that may have just been my fault. The stereotype of Brazilians, which certainly aligns with my personal experiences in the US, is that they are extremely warm and friendly, but I know I will still need to push myself to reach out to meet new people and to not hide behind my language difficulties or the cultural differences. I also probably need  to start taking 7 showers a day with all the cheek kissing.

One thought on “Stela Connections”