As I may have mentioned in a recent, somewhat grumpy post, I spend a lot of time on public transit. In fact, I think I have now taken every form of public transportation available here. My first, and in my opinion by far the best, is the metro. It is pretty cheap (R$3), easy to use, relatively clean, and it reliably arrives every 2-3 of minutes. The huge downside, as anyone will tell you, is that it is far from extensive. In fact it’s kind of a nice surprise when I can get where I want to go using the metro. There is an upside to this too though. Once when I was in a particularly large hurry, I was pleased to see that I’d somehow caught the yellow line express, which apparently skipped about 3 stops I didn’t need. Curious to know for future reference how I would know which trains were express, I asked a friend. She laughed, telling me that there are no express trains in Sao Paulo; those three stations simply had yet to be built! Apparently the supposed completion of the metro is a big joke to Paulistanos, as is the construction of a monorail, which was to be completed prior to the World Cup.

All around the city, there are a number of train lines supplementing the metro. However, I’ve only used them once as they rarely go where I need to and they are slower than the metro. What all this amounts to is that I spend the vast majority of my time on buses, which is always something of an adventure. First, many parts of the city have bus stops delineated solely by a metal pole or stick in the ground. The other day, I asked a group of women standing around talking whether we were at a bus stop and, if so, how I could tell. They laughed and said, “Yes, of course it’s a bus stop. It’s obvious because two buses just stopped here!” The more established bus stops have shelters and occasionally even a posting with the numbers of the buses that pass by. And yet, even then, I have found that if you flag down a bus not included on the posting, the motorist will stop (for a millisecond) to snap you up. Usually you have just enough time to leap onto the bus before it jolts forward, flinging you toward the back. Luckily your flight is interrupted as your stomach jams into a turnstile, reminding you to hold up your “bilhete unico” bus pass or pay R$3 to the guy sitting next to it, who is calmly watching you flail. And somehow, now that you need to use all your strength to push through an inexplicably heavy turnstile while also employing enough finesse to lift your bag over the top, the momentum of the bus has changed to pull you back toward the front.

I think I remember a time, not so long ago, where I worried about how I appeared to strangers on public transportation, but that time has long past. Now I just want to stay upright. Just yesterday, I saw a woman fall headfirst down the stairs from her perch standing next to me. And even finding a seat is no great victory. The backs of the seats are plastic so your knees jam into them, bracing you from the curves and jolts resulting from a suspension system that easily rivals my childhood neighbor’s much-vaunted Gary Fisher’s Rockshox. Needless to say, I long since gave up trying to read or prepare for class on the bus. I also learned pretty quickly that buying the deliciously greasy mini Pão de queijo at the Vila Madalena bus station terminal, immediately prior to boarding, was a huge mistake. I think there is an expression here something like, “eat in the street, die at home.” I would just make a slight adjustment and replace home with bus.

END_OF_DOCUMENT_TOKEN_TO_BE_REPLACED 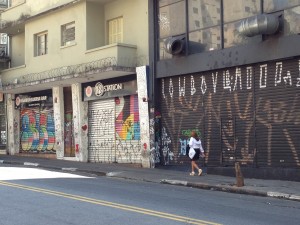 END_OF_DOCUMENT_TOKEN_TO_BE_REPLACED

I will admit that my first day here made me a little more nervous about finding my way around than I wanted to let on. I kept telling myself that I’ve been fine navigating all sorts of other major world cities, even Seoul, where I couldn’t read signs or talk to anyone, but that didn’t make me feel any better. I think a major difference with Sao Paulo is that I’ve heard from so many Brazilians how careful I need to be—don’t use your iPhone to take pictures, don’t wear sunglasses on your head, be wary of people walking too fast or too slow, always carry R$20 so that the homeless people won’t shoot you. It’s enough to make anyone feel a little bit paralyzed. In the midst of North America’s summer I had also blissfully forgotten that with the winter season comes early darkness. By the time I woke up from my nap/haze on Saturday around 6pm, it was dark outside, and I was petrified of venturing out alone.

Things shifted yesterday though thanks to my Airbnb host, Tammy. I had hoped staying in an Airbnb might be a great way to meet people, get to know the city and maybe even make a friend. For once, I was not wrong. Tammy has lived in Florida as well as London, so perhaps she understands what it’s like to be a foreigner in a strange new place or she is just a really understanding, patient person—probably both. Yesterday morning she brought me to a nearby bakery, and she made sure to point out again the direction we had come from to get there, even though the apartment is nearly visible from the bakery. These are the types of kindnesses I seriously appreciate but am usually too embarrassed to ask for.

Tammy’s apartment is in a high rise located on what looks to be almost a back road, but it’s actually in a neighborhood in the center of the city (Bela Vista) and just half a mile away or so from Avenida Paulista, Sao Paulo’s answer to Saks fifth and Michigan Ave. Stela told me that I can find any cute brand name article I could possibly desire on Paulista and then simply go to the cross street Rua Augusta to buy the knock-off. Walking along both these streets with Tammy yesterday though, I never would have guessed that there is shopping on either of these streets. There were no shop windows, few pedestrians, and it was hard to believe on a sleepy Sunday morning that this was the center of the city, never mind a major shopping district.